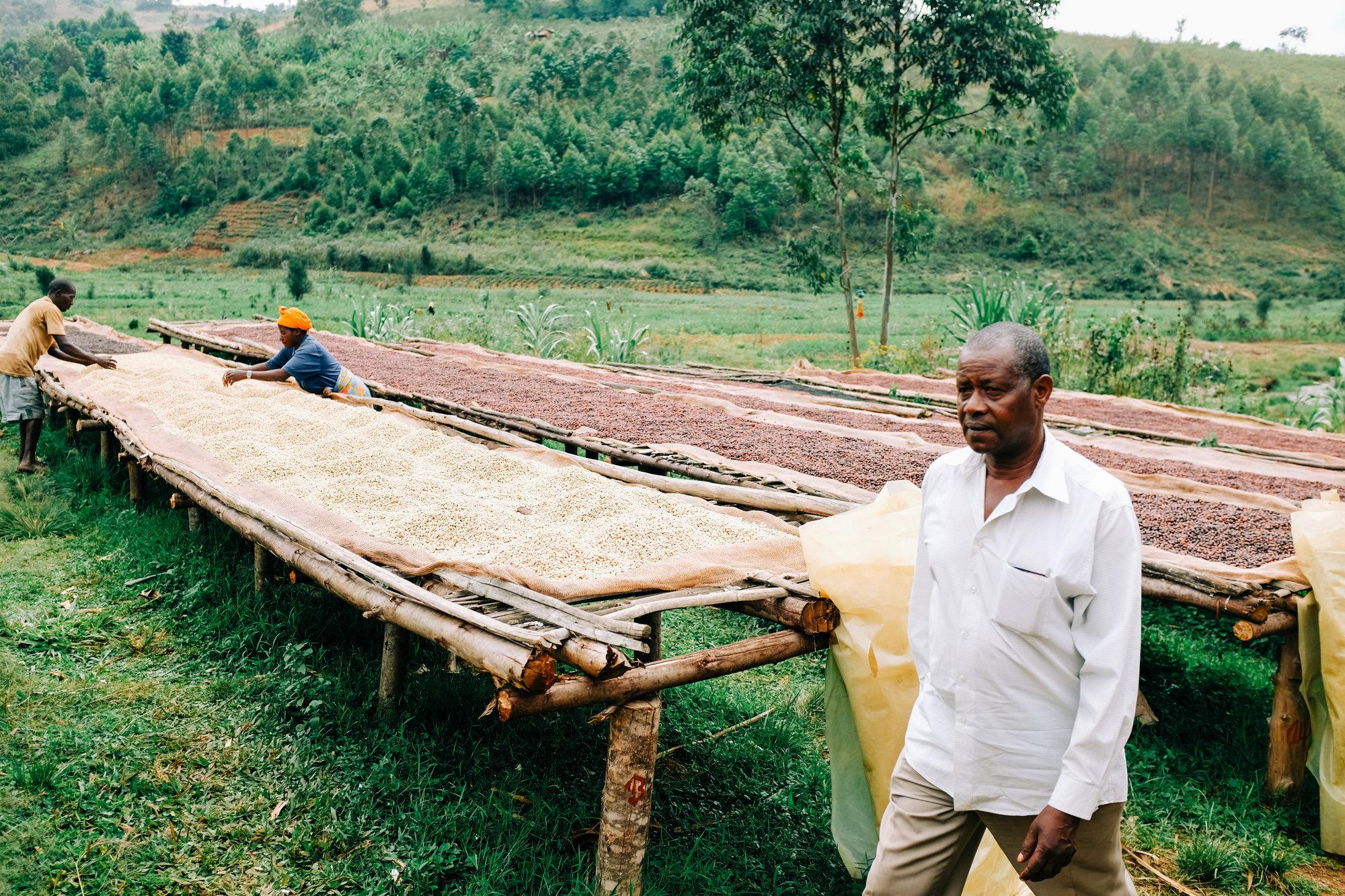 Bufcoffee was founded in 2003 by Epiphanie Mukashyaka and is now managed by Epiphanie and her son, Samuel Muhirwa, who is taking an increasingly active role in running and expanding the business. The title ‘Buf’ derives from ‘Bufundu’, the former name of the region in which its washing stations are located. Epiphanie, who was born in 1959, was widowed during the 1994 genocide - which claimed over 800,000 lives in just 3 months - but chose not to leave her family’s small coffee farm. Instead, she set about rebuilding and developing her business and with it the local community. She started Bufcoffee in 2003 when she established Remera washing station with a loan from the Rwandan Development Bank and the assistance of the USAID-financed PEARL project.

This transformational programme was aimed at switching the focus in the Rwandan coffee sector from a historic emphasis on quantity to one of quality - and so opening up Rwanda to the far higher-earning specialty coffee market. The programme and its successor, SPREAD, have been invaluable in helping Rwanda’s small-scale farmers.

Although we regularly feature Rwandan coffee at this time of year, this is the first time we have bought one that is naturally processed. This example leapt off the cupping table right from first sniff due to the heady fragrance of banana bread and floral vanilla. It's an unusual combination that I've experienced only in natural Burundi's before and therefore seems to be unique to this region of Africa. Though there is a dose of boozy ferment coming from that natural it's not overpowering and overall it's just a constituent part of this really sweet and complex coffee. The finish also features a sour cherry acidity which cuts through the sugary, dessert-like notes perfectly. I found that this coffee brews really well across all methods and I'd recommend it for those who like fun and juicy espresso.

Suitable for - All brewing methods

Damian our coffee buyer first encountered the Musasa Dukunde co-op in 2007 when Specialty grade Rwanda first arrived in the UK and he has been buying from them ever since. This example leapt off the cupping table and he declared one of the best lots that they have ever produced. The Ruli washing station which was built with a development loan from the Rwandan government and the support of a US Aid programme called PEARL which was instrumental in opening Rwanda up to the more profitable and quality focussed Specialty sector. This and it's successor (SPREAD) have been invaluable in helping the country's small-scale farmers rebuild and remodel their production in the wake of the devasting early 90's double-hit of a global coffee crash alongisde well-documented national genocide. Farmers with the Musasa Dukunde co-op have seen their income at least double and they also receive school fees and medical insurance alongside practical quality premiums in the form of livestock (for food and fertiliser) and specially modified bicycles to deliver their cherries to the washing station.

I must admit that although Rwandan coffees that I have tasted in the past have been juicy and sweet, they don't often reach the clarity and complex acidity found in those of nearby Kenya. This however is right up there. The fruit is juicy and complex with sweet plum and tart dried cranberries and the body is silky and soft. There is also a note of black tea and lemon zest. We struggled to make this work as an espresso but it's so good as a filter that it hardly matters and it's probably the best Rwandan coffee I've ever tasted. While the search for the perfect Kenyan continues this more than makes up for it!

The PROCASTA washing station was opened by Pierre Nyzeyimana in 2012 and offers exceptional facilities to the 2500 smallholder farmers who use it. After a career spent both as a farmer of various crops (including coffee) and a washing station manager, Pierre understands both the challenges faced by farmers and what infrastructure is required to process exceptional coffee. A family man with three sons who he one days hopes will take on the station, he also cares deeply about his farmers and is quoted as saying that their happiness is his number one priority.

We purchased this small lot from Homage Coffee Source, a US based exporter who we came into contact with in Summer last year when their UK contact Maddie visited the roastery with pre-shipment samples. It's a pleasure to be able to showcase the final product and we are really pleased with how it's turned out. Given that we also have a more delicate washed African coffee on this list, we took the decision to develop this one a little more in the roast to emphasise body and sweetness, partly with a view to producing a great SO espresso as well as a plump and crowd-pleasing filter. I'm convinced that we've done just that. In the cup I find lots of toffee-apple notes, dark cherry fruit and a full body. As espresso the acidity is moderate and well-balanced for a high altitude, washed African coffee and carries a fragrant hint of sweet almond which this makes it a delicious brew with both with or without milk.

Suitable for - All brewing methods

We Are Hiring - Admin Assistant

We are looking for someone to join our team as an Admin Assistant.

The Dark Woods Coffee new-style monthly Pop-Ups are back, and in time for the warmer weather.

Our Head of Training and Customer Support Tom on how changes to our training programme can support you even better in 2022.